Skip to content
Posted on September 30, 2017October 2, 2017 by subjectmortalitech Posted in BATTALION 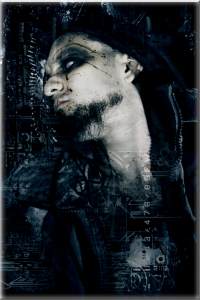 Physical appearance: Slightly taller than average with a good physique, the result of an intensive personal training regime. He does not have any remarkable features, aside from his dreadlocked hair, and blends easily in to a crowd. He looks intense, but slightly strung out, the product of too many late nights. He does not sleep easily. His movements are infused with a kinetic energy, even the smallest action carries force and weight.

Profile: The Subject works for one of the major Implant manufacturers. He has a background in neuroscience and cybernetic interfaces. His knowledge is hard-won, the result of years of experience in the field. Outside of work he is a loner, shunning other company. He narrowly avoided a trip to the detention units after almost killing a man that broke in to his home. Despite his isolated nature he is an idealist at heart, in part rejecting the current world because he believes it could be so much better. Over the last decade he has suggested multiple improvements to the implant that would improve its integration with the human mind, and in turn the efficiency of function of the implant. These gains in efficiency derive from making better use of the neural structure itself. Fundamentally these improvements would be of most benefit to those reliant on the state for their implant, as they do not have access to the expensive hardware that provides the top tier of cortical process enhancement. As such his employer has dismissed his ideas as they will not enhance shareholder value. These rejections have contributed to The Subject’s current state of obsession. He has always felt apart from others; his powerful ego telling him that he was better and therefore above those that chose differently, or did not see how he sees. This sense of alienation, combined with his desire for change leads him to decide to take unilateral action to save or change mankind. He does not care what the change is, seeing anything as better than the current bureaucracy and failed democracy. He sees nothing of worth in those that have risen to power above him – their values are not his – and he will tear them down.